Epsom Circle normally meets on the third Thursday of every month at the RAC Club at Woodcote Park.

Meetings begin at 7:30pm. and are followed by dinner.

Visting brothers please contact the Vice President to book yourself in for dinner click here to email VP.

The Catenians is an international association of Catholic business and professsional men who meet socially once a month at local branches (known as "Circles"). Members refer to each other as "Brothers" to reflect the mutual support and common Catholic bond that is found in the association.

Do I have to be Catholic?

Yes.
You must be a practicing of the Roman Catholic Church to join and remain a member.

Where does the Circle Meet?

How much does it Cost?

Each circle has a membership fee which covers membership from April to March the following year. These subs are decided by a vote of members each year. As we are a dining circle, you will need to pay for your meal each month. Please enquire about current charges.

Actually it is a bit misleading to say ladies are not members. Many of the wives of brothers feel as much a part of the association as the brothers. Although the ladies do not attend the meetings, they are involved in many of the social events of the circle and the association.

No.
The Catenians is NOT a secret organisation. Brothers are proud and open about membership. We welcome visitors into our meetings and social events.

Epsom Circle was founded on 12 April 1934 by a total of 23 Brothers, under the Presidency of Brother Gordeon Hensler, KSG, JP.

He was succeeded as President by Brother Victor Feeney. Both were previously members of the City of London Circle and together they recruited members resident in Epsom and Sutton.

The founder Secretary of those distant days was Brother Cornelius Donnell O’Sullivan who later became Circle president on three occasions.

Evidently Epsom Circle was modelled on the City of London Circle and up to the outbreak of war in 1939 meetings were convened at the Spreadeagle Hotel in Epsom where it was customary for dinner jackets to be worn at all Circle Meetings. During the war years, with members absent in the services, Circle Meetings were naturally small and were conducted at the home of Bro. Victor Feeney; much can be attributed to Bro. Victor in maintaining the Circle intact during those dark days. At the end of the hostilities, meetings were resumed with the Spreadeagle as the chosen venue. The cost of dinner in those days must have received unanimous approval at 8/6d (43p) per head, while the annual subscription of £2.14.0 (£2.70) makes for an interesting comparison with today’s inflated prices (£2.70).

Since the late 1970’s we have enjoyed the services offered by the RAC Club for both our Circle Meetings and social occasions. The RAC clubhouse is one of the premier meeting places in Surrey and has remained the venue of choice for the circle.

Membership of the Circle has varied significantly over the years and the rate of recruitment even more so. During the 10 years from 1954 to 1964 records show only 5 new members, whereas in the single year of 1948 a total of 10 new members were initiated into the fold. 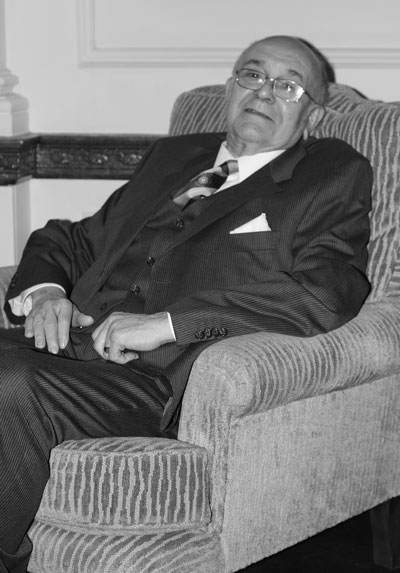 One of our most distinguished Brothers was Gus McGrath who joined from City of London Circle and became Circle President and Provincial President before holding office as Grand Director.

In 2009, Brother John Massarella was awarded his 65th anniversary scroll. John joined the association in 1944 at Doncaster. When work brought him south in 1966 he joined Wimbledon Circle and then after retirement to Epsom in 1991.

Other Brothers of the Circle who achieved distinction were Frank Doggett, who was Deputy Chairman of the Atomic Energy Association, and Walter Fitzgerald, who was made a Freeman of the City of London and was also a Papal Knight.

Brother Frank Campbell and his wife Oonagh were awarded Knight/Dame Commander of the order of St. Gregory.

If you are interested in joining our Circle please make contact with the membership officer by filling in the form below. You will be contacted to arrange visiting us on one of our monthly meetings. There is no commitment or pressure to join. Normally gentlemen will visit at least three times before making a decision to join fully. Your wife may also like to visit one or more of the social events or attend one of the two ladies nights and would be very welcome.